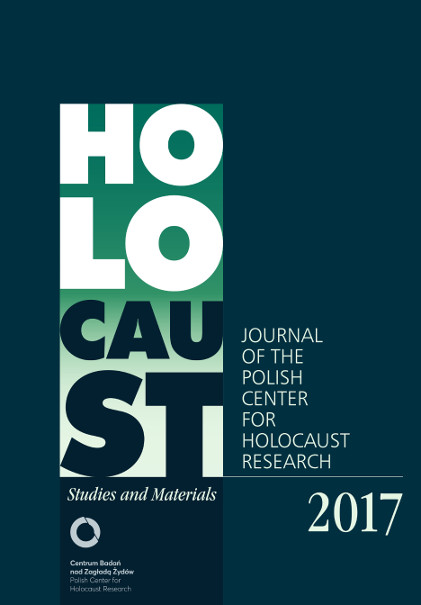 POLIN Museum of the History of Polish Jews

This volume contains a selection of articles from Holocaust. Studies and Materials published by the Centre for Holocaust Research during 2014–2016. This is already the fourth English volume intended to familiarise the foreign reader with the newest Polish research on the Holocaust and also introducing unknown documents from Polish archives into scholarly circulation. The previous editions were published in 2008, 2010, and 2013.

The several dozen texts in this volume are arranged in an order modelled on the Polish-language version, though it was decided not to include a selection of the reviews printed in our periodical.

The first section, Studies, contains six texts. The article opening this volume is Jan Grabowski’s text that reveals new facts regarding the March 1944 discovery of the bunker where Emanuel Ringelblum, the Oneg Shabbat founder, was hiding. This study sheds new light on the mechanism of tracking down Jews in Warsaw. Grabowski’s analysis of post-war court files proves that specialised groups of criminal police functionaries played an extremely active role in those efforts. Barbara Engelking’s study, which also regards the Warsaw context, discusses the help provided to about a dozen Jews by a pre-war avowed anti-Semite. It is not a simple and unambiguous case, however, because after the war that Pole was tried for having acted to the detriment of other Jews. Another of our authors, Dariusz Libionka, presents the reactions of the Polish Government in exile, its consulting body, the National Council of Poland, and the Polish press published in London to the struggle waged by the Warsaw ghetto in April and May 1943. Libionka analyses the reasons for the classification of the initial news from the ghetto, and the Polish authorities’ and also the émigré political circles’ distance towards the fighting Jews. He also discusses the fact of the propaganda taking advantage of Szmul Zygielbojm’s death and Jewish resistance.

The article devoted to the post-war violence against Jews in the Podhale region of Poland deserves special attention. This topic has long inspired heated emotions and has become radically politicised. Suffice it to say that Józef Kuraś ’Ogień’, whose subordinates conducted most of the massacres of the Jews who had just survived the Holocaust, was praised as one of the greatest commanders of the post-war anticommunist underground. One should bear in mind that in 2006 the late Polish President, Lech Kaczyński, ceremonially unveiled Kuraś’s monument in Zakopane. Recreating the course of the consecutive crimes, the author of the text, Karolina Panz, focuses not only on reconstructing their mechanism and perpetrators, but also on the biographies of the victims, convincingly proving that they had nothing to do with communism.

The last two articles in this section were written by Nawojka Cieślińska-Lobkowicz and Elżbieta Janicka. The former concerns organised looting of works of art owned by Jews in the General Government, while the latter discusses the politics of memory and the ways of commemorating Polish and Jewish martyrology in Warsaw. The analysis conducted by Elżbieta Janicka reveals why the monument devoted to Poles murdered in the East during World War II was erected on the former Muranowski Square, where the fiercest fighting in the ghetto went on in April 1943.

Among the texts included in the From Research Workshop section the article about Witold Pilecki is particularly recommended, who has recently become one of the most popular Polish national heroes. According to the dominant narration, Pilecki voluntarily let the Germans deport him in the autumn of 1940 to the Auschwitz concentration camp, which was under construction. The author of this text, Ewa Cuber-Strutyńska, proves that the matter is more complicated, pointing out the discrepancies between different accounts of Pilecki’s arrest. Similarly, the issue of the role of Pilecki’s reports in the transfer of information about the extermination of Jews in the Birkenau gas chambers remains unclear. As we had expected, this text received a particularly cold welcome from nationalist publicists.

In the Materials section we publish the diary of Chaim Einhorn, who was hiding in the Warsaw ghetto, correspondence of members of the German military and police formations that participated in the extermination of the Jews (intercepted by the Home Army intelligence service), and last but not least, reports from several ‘blue’ police stations written during the spring of 1943 (including the period of the Warsaw ghetto uprising).

A separate section is devoted to the POLIN Museum of the History of Polish Jews, opened in 2014. We present the voices of both the creators and the critics of the individual exhibition room’s conception and content.

In the last section, Controversies, overviews are published of the newest publications and actions regarding the Righteous among the Nations. From the point of view of the Polish ‘historical policy’, which strives to subject historical research to political requirements, this is the subject matter most susceptible to manipulations and most often exploited.

POLIN Museum of the History of Polish Jews