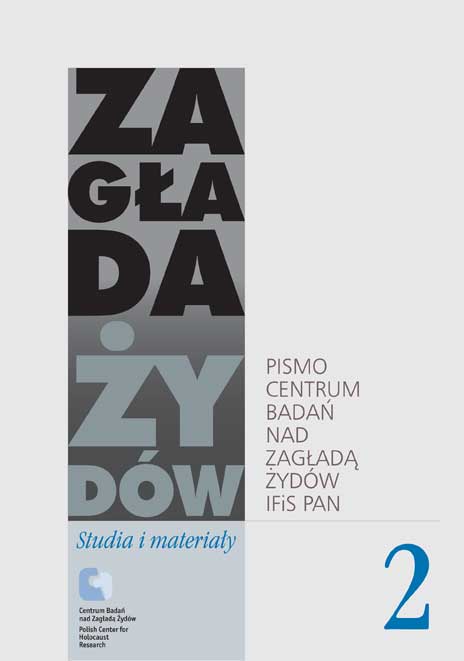 This article follows the postwar trial of Shepsl Rotholc.  Rotholc was a successful interwar boxer for the Jewish sports club Gwiazda who was a Polish national champion in the flyweight class.  In the Warsaw ghetto he joined the ranks of the Jewish police [służba porządkowy].  After the war survivors accused Rotholc of mistreating them during deportations from the ghetto, and the Central Committee of Polish Jews (Centralny Komitet Żydów w Polsce), the principal representative of the postwar Jewish community in Poland in the immediate aftermath of the Holocaust, put him on trial in November 1946 in its recently established citizens’ tribunal [sąd społeczny], whose charter authorized it to determine whether a Jew suspected of reproachable behavior under the German occupation of Poland “behaved in a manner befitting a Jewish citizen” [“zachował postawę godną obywatela-Żyda”].  Rotholc was the first defendant to be tried before the citizens’ tribunal [sąd społeczny] of the CKŻP.

At his trial Rotholc denied the charge that he had abused fellow Jews in the ghetto.  By his own account, he had joined the Jewish police to support his family because under the color of his authority and thanks to his reputation in the boxing ring he was able to protect smugglers who compensated him for his assistance.  He even claimed to have rescued members of his family and friends from deportation.  Defense witnesses painted a different picture.  His alleged victims repeated their accusations of his mistreatment of them during roundups, and postwar Jewish leaders who had taken part in the Jewish underground vilified the Jewish police in the ghetto.

The citizens’ tribunal [sąd społeczny] of the CKŻP found Rotholc guilty of violating its charter.  The basis for his conviction was not his mistreatment of fellow Jews but rather his continued service in the Jewish police after the conclusion of the first wave of deportations from Warsaw in September 1942, when, the judges reasoned, the Germans’ true intentions not to resettle but to murder the Jews of Poland was unmistakable.  In accordance with sanctions authorized in its charter, the tribunal [sąd społeczny] expelled Rotholc from the Jewish community for two years, revoked his right to participate in communal activities for three years, and ordered publication of his conviction in the Jewish press.  After two years Rotholc petitioned for and received a commutation of his sentence.  He then left Poland and immigrated to Canada.

After Rotholc an additional twenty-four Jewish defendants were tried in the citizens’ tribunal [sąd społeczny] of the CKŻP through the end of 1949.  Of these, eighteen, including Rotholc, were found guilty, while seven were acquitted.  The cases of an additional fifty suspected Jewish collaborators were dropped by lawyers for the CKŻP because of the lack of incriminating evidence.  Although Rotholc’s conviction was to be expected, the subsequent record of the tribunal [sąd społeczny] suggests that it took seriously the agonizing task of identifying putative collaborators from within the ranks of the Jewish remnant in postwar Poland and acted with a fair share of judicial integrity.