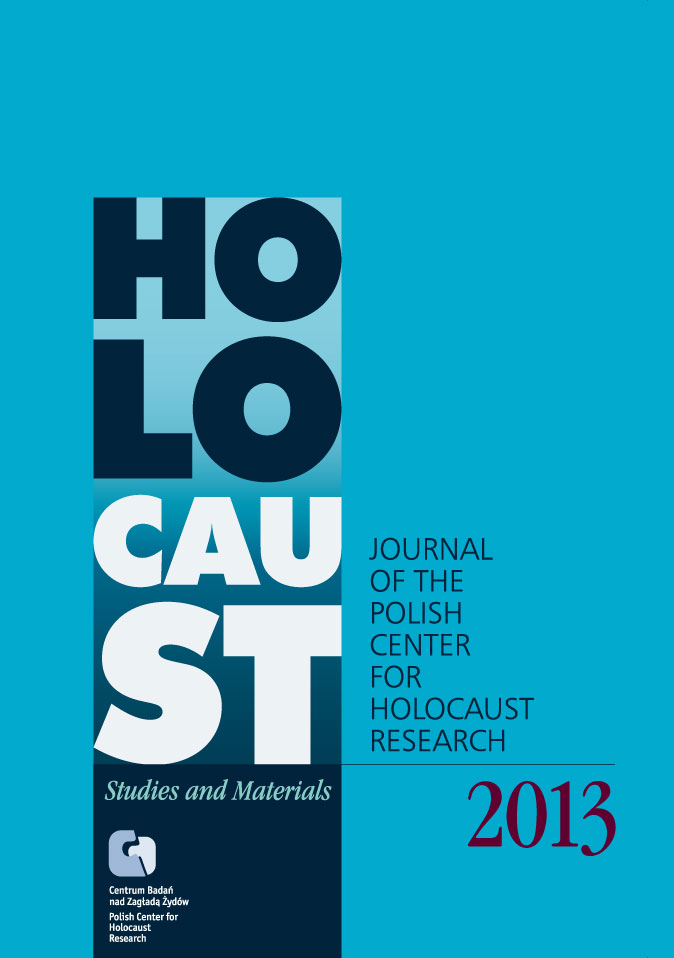 This volume contains texts published during 2011–2013 in the Zagłada Żydów. Studia i Materiały yearly published by the Polish Centre for Holocaust Research, Warsaw. The previous volumes of the English edition were published in 2008 and 2010. The purpose of Holocaust. Studies and Materials is to present the most recent research undertaken in Poland, primarily that based on source materials kept in local archives, in the hope of introducing them to academic circulation. The intention is also to familiarise the foreign reader with the current discussions and disputes in Poland regarding the subject matter of the Holocaust and Polish-Jewish relations.

Four of the texts published in this volume deal with the perception and treatment of the Jews, escapees from the ghettoes and camps, by the partisan detachments of the Home Army and other underground organizations. This subject matter continues to be highly controversial. For instance, after a German TV channel had transmitted the miniseries Generation War [Unsere Mütter, unsere Väter], which shows anti-Semitism spread in the ranks of the Home Army, there was a wave of criticism in Poland.

The studies presented in this volume do not offer a comprehensive analysis of the complex issue of the attitude of the Polish underground resistance to the extermination of the Jews they witnessed. Instead, the studies are multi-faceted analyses of murders committed on the Jews during 1942–1944. The first text, written by historian Alina Skibińska and ethnographer Joanna Tokarska-Bakir, discusses the murders committed on the Jews by members of the famous partisan detachment of the Home Army operating in the Kielce area. The victims included a Jewish family, its Polish helper, who years later received the Righteous among the Nations medal, and a member of a Home Army detachment, who was murdered after his anti-Semitic companions had discovered his Jewish origin. One of the effects of the publication of that text was that the AK officer who cooperated with the authors was excluded from a combatant organization. Dariusz Libionka’s text is the most recent voice in the discussion, which has been proceeding in historical literature, regarding the case of the murder of a group of escapees from the forced labour camp on Lipowa Street in Lublin, who were Polish soldiers of Jewish origin taken prisoner in September 1939. Libionka’s careful reading of the source materials enabled him not only to reconstruct the facts, but also to reveal the manipulations perpetrated in the 1990s by some Polish historians. There is no doubt that the massacre was committed by a nationalist group, which was soon incorporated into the National Armed forces (a right-wing organization, not affiliated with the mainstream Home Army). The “Materials” section presents studies regarding the murder committed by members of the local Home Army network on a few Jews hiding in a small village in the Opatów county and the execution of a few dozen escapees from the forced labor camp in Skarżysko-Kamienna conducted by a Kielce detachment of the Home Army shortly before the liberation in August 1944. The article by Anna Bikont, who inspected the scene of the said crime in 2011, is a postscript to the latter text. All authors of the texts reconstruct the course and mechanism of the events as well as their wider context. They also wonder to what extent those anti-Jewish actions resulted from the orders and to what extent they were a consequence of the demoralization of some members of the underground. They also try to discover how common such incidents were.